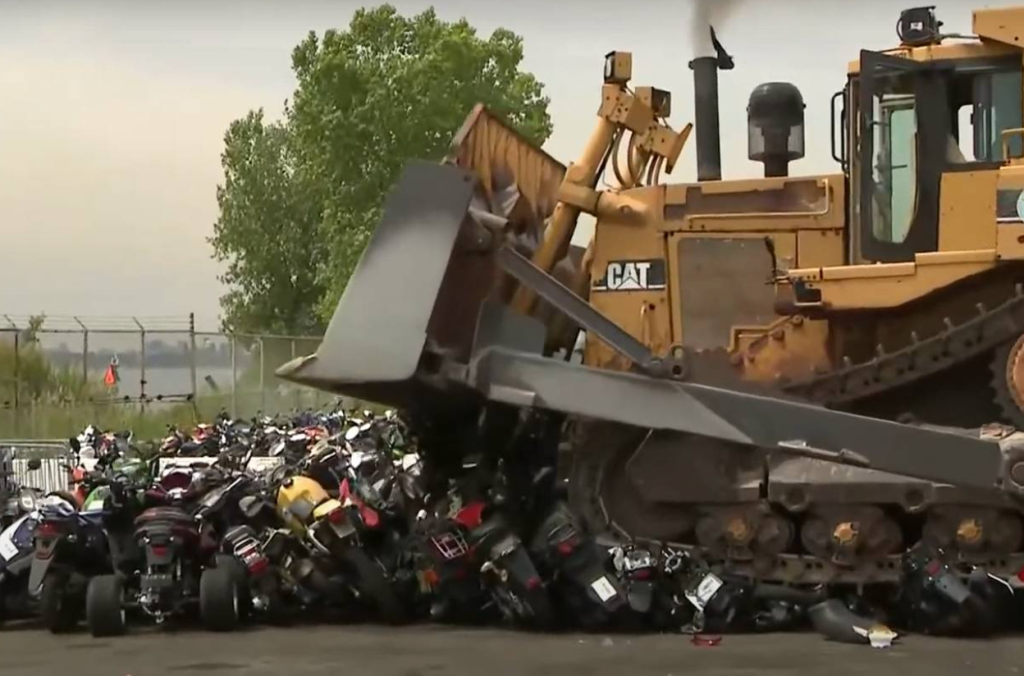 Looks like there’s going to be a lot less dirt bikes and ATV’s motoring loud and proud in your neighborhood as New York City just destroyed a gang of them.

The Gothamist is reporting that the New York City Police Department straight up crushed a mountain of ATVs and dirt bikes at the Brooklyn auto pound this past Tuesday (June 21). Why? Well, for “public safety” of course even though there isn’t a surge of people getting ran over by dirt bikes or ATV’s out here. Still, Commissioner Keechant Sewell feels these are death on wheels and wants to send a clear message to the wannabe Ruff Ryders of New York.

“We will seize that bike and we will destroy it,” she said at a press conference at the Erie Basin Auto Pound. “We take this very seriously, because driving these motorbikes on city streets, on sidewalks or in parks and within housing developments is dangerous, it’s reckless and it’s illegal.”

Sewell said the NYPD will use every tool at its disposal to rid the streets of dirt bikes, which are meant for recreational, off-road use – not for busy urban neighborhoods. Police have reportedly seized about 2,000 ATVs and motorbikes so far this year – almost double the number taken by this time in 2021.

Real talk, we’ve seen these joints so much out in the hood we didn’t even know it was illegal. We thought it was all good to have one out on the curb. Who knew? They are loud and annoying in the wrong hands though and it seems like those fools have conjured up enough noise to force the city’s hand.

“It is the people living in these communities who are making the majority of complaints,” the commissioner said. “They are telling us loud and clear to get these motorbikes out of our neighborhoods and keep them out. And the NYPD got the message. And that’s exactly what we’re doing.”

Mayor Eric Adams meanwhile supports the move and wants state lawmakers to tighten the requirements to purchase these kinds of motorbikes, so that they’ll require proof of insurance and registration.

If anyone knows about quality of life and living it to the fullest, it’s Mayor Eric Adams.

Enjoy them bikes and ATV’s for the remainder of the summer, y’all. They’re coming for them…