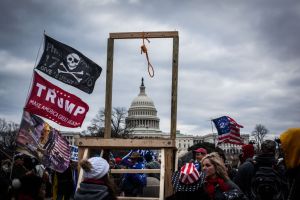 The terroristic acts performed by a gathering of Donald Trump supporters for the “Stop The Steal” rally last week has dominated the news cycle. Ali Alexander, a conservative activist, claims that he planned the so-called insurrection with three sitting GOP members of Congress.

In a now-deleted video that was tweeted out and captured by Project on Government Oversight journalist Jason Paladino, Alexander firmly states that Reps. Andy Biggs, Mo Brooks, and Paul A. Gosar, all supporters of Trump’s failed attempt to overturn the Election Day results and stand behind the nation’s will that President-elect Joe Biden rightfully won.

“We four schemed up of putting maximum pressure on Congress while they were voting,” Alexander said in the now-deleted video that first aired via Periscope. Alexander added that he and the congressmen wanted to, “change the hearts and the minds of Republicans who were in that body, hearing our loud roar from outside.”

in case he takes the video down, here's the relevant section pic.twitter.com/IYiqxeX6Ch

As it stands, Alexander has joined Trump and others who have whipped up the election fraud nonsense in getting his Twitter account suspended. And as a result of Alexander dry snitching on the congressmen, the receipts have been piling in that would suggest that the alleged co-conspirators had it in for Biden and Vice President-elect Kamala Harris, all while promoting that their oddly-coifed hero in Trump should remain in power for four more years.

While Paladino’s report on Alexander’s video came out last week, it’s been picking up steam in the wake of the impeachment talks occurring in Congress at the moment. So far, it appears little damage has been done to the political standing of the Republicans that stood in support of Trump, the protest, and the objection to the Electoral College results.

In that way, feels a lot like the America many of us are used to.