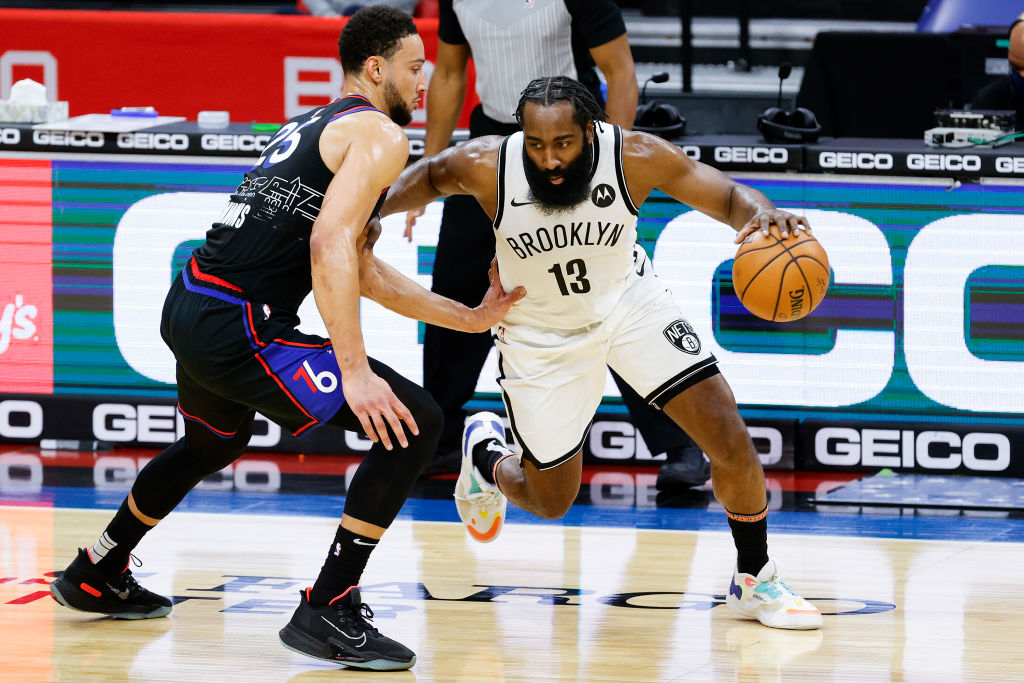 The Ben Simmons and James Harden trade is looking like it didn’t benefit either the Brooklyn Nets or Philadelphia 76ers.

After the Philadelphia 76ers got bounced out of the playoffs by Jimmy Butler, and the Miami Heat Thursday night (May.12), NBA Twitter ultimately decided that the trade between the Nets and Sixers didn’t benefit either franchise. Harden, who has been a shell of his former self since he was dealt from the Houston Rockets to the Nets, kept his playoff legacy of disappearing during the postseason going.

With a hobbled Joel Embiid trying his best to help Philly force a Game 7, Harden decided to check out in the second half of the game, only taking TWO shots. Yes, you read that correctly, just TWO shots. Stephen A. Smith didn’t waste any time chiming on the matter. “That performance by James Harden requires an investigation,” Smith began his rant. “How in God’s name do you go 22 minutes in the second half and attempt one shot. It was a horrific performance, anemic, an impotent performance by James Harden.”

Stephen A Smith’s quick rant on Harden and Doc Rivers

Following the game, Harden didn’t help his case when explaining his lack of offensive production, saying, “We ran our offense, and the ball didn’t get back to me,” per Tim Bontemps.

James Harden, when asked why he only took two shots in the second half: “We ran our offense, and the ball didn’t get back to me.”

Speaking of Embiid, he came very close to throwing James Harden under the bus, just like he did Ben Simmons.

"Obviously, since we got him, everybody expected the Houston James Harden, but that's not who he is anymore. He's more of a playmaker."

As for Ben Simmons, while some can argue we have yet to see if he pans out for the Brooklyn Nets because he hasn’t played a game for them yet, there are still some red flags. Mentally, Simmons still seems like he is not ready to return. Physically, his back continues to be an issue for him. Before the Nets were hilariously swept out of the NBA Playoffs by the Boston Celtics, it was widely speculated he would return. That wasn’t the case, with Simmons sitting out Game 4 due to “back soreness,” which ultimately led to him getting back surgery.

Ben Simmons and James Harden attempting the same number of second half shots in Philly's last two elimination games was the only way this could have ended.

Once Harden was bounced out of the postseason, NBA Twitter wasted no time dragging him and revisiting the trade that looks like one of the most useless ones in NBA history.

Harden and the Sixers heading to Cancun pic.twitter.com/ZRjp0rfyuV

At least James Harden has more time to hang with his buddies Lil Baby and Meek Mill.

Sixers swapped Ben Simmons out for a dude who took TWO (2) total shots in the 2nd half of an elimination game.

James Harden is 32 going on 42. Even worse, he just doesn't CARE. He's made tons of $$$ and knows somebody will pay him tons more. He's got his MVP. He's Top 75. Championships never were his thing. Hides under playoff pressure. Supremely skilled nightmare.

Don’t ever, EVER put James Harden and Dwyane Wade in the same fucking sentence again.

got simmons off the roster just for harden not to shoot with the season on the line. i gotta admit that's pretty funny.

James Harden fell off so bad after the NBA rule changes.

James Harden stats in the 2nd round