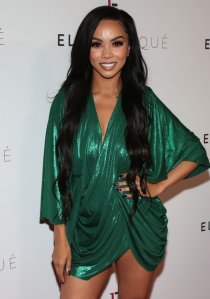 Brittany Renner has gained a reputation of sorts whether justified or not, and it appears that she’s leaning into the joke. a bit further than most are willing to accept. The popular Instagram model is currently visiting the campus of Jackson State University, and issued a grim warning to folks that they should “Hide your sons.”

Via a tweet shared on Friday, Renner, 29, shared a message that she arrived at Jackson State, writing, “Hey Jackson State! Hide your sons” complete with an image of herself smiling with the school in the background. Immediately, many on Twitter began their attempts to dress down Renner, especially after many are alleging she has a habit of grooming younger men for financial gain in the wake of her past relationship with NBA player, P.J. Washington.

Renner has been addressing the chatter around her supposed aims and doesn’t seem to be deterred by the comments of detractors, even telling one man to “shut up” in response to her initial jab. As it stands, Brittany Renner seemingly could care less what the world thinks and the reactions from Twitter can be viewed below.

Brittany Renner is def a predator lol cause like why you 30 on a college campus scouting for young men?

You can’t get nobody yo age Ha? That p*ssy threw Ha?

I refuse to call Brittany Renner a predator for coming up off an athlete who chose to be with her. Not while some of y’all are still dying on a hill somewhere defending R Kelly and Bill Cosby. https://t.co/Z8HfzxPM54

Petition to Ban Brittany Renner from All US college campuses because she’s predatory https://t.co/59P1dGP0sC

At this point I'm just waiting for the premier of "Surviving Brittany Renner" pic.twitter.com/wtL0CehV3Y

Brittany Renner when she pulls up to a college campus & sees a prospect pic.twitter.com/ArGoDBsj0v

Brittany Renner on college campuses trying to find her next meal ticket pic.twitter.com/l8V57LmE52

College dudes when they find out Brittany Renner on campus: pic.twitter.com/OKkpmW9tq1

If Brittany Renner pulled up at my campus tryna groom me. pic.twitter.com/nSuSPNxbr2

When a college student sees Brittany Renner walking up to him after knowing what she did to PJ Washington... pic.twitter.com/4ShpPQUc4Q

I do not understand the appeal of Brittany Renner at all.